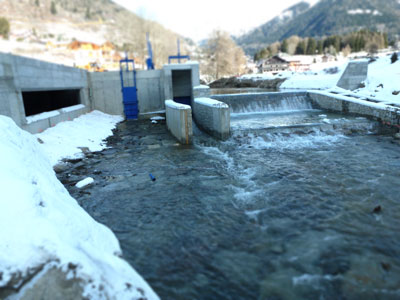 STE Energy, a company part of the Sorgent.e group, on the behalf of Leptine S.r.l., completed the turnkey execution of the electrical, mechanical and automation works for a hydroelectric power plant in Temù, in the province of Brescia, on the Oglio river.

It took just 3 months to STE Energy to complete the works, thus meeting the client’s requirements as well as those of the local community, very much involved and interested in the renewable energy issue.

The plant will exploit the natural course of the Oglio river, dispalying a rated head of 90 meters. The plant is 3km far from the intake and the connection has been executed with a completely underground RGP penstock with a 2000 mm diameter. The maximum granted flow is equal to 8 mc/sec.

The plant is composed of two 2.617 kW each FRANCIS turbines and of one 1.185 kW PELTON turbine guaranteeing the production even in case of low flows depending on the flow of the river.

Once fully operational, the plant will be able to produce more than 26.8 million of kWh per year thus meeting the demand of more or less 8000 families and avoiding the emission into the atmosphere of about 13.500 tons of CO2.