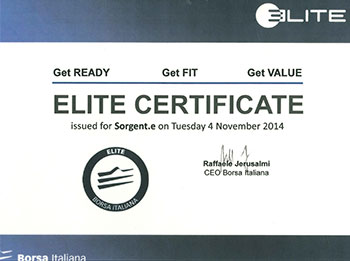 Sorgent.e, international player  and owner of more than 30 companies in the renewable energy sector, is growing in South America with new projects worth more than 60 million Euros.

Furthermore, yesterday, November 4th, Sorgent.e was awarded the “Elite” Certificate by Borsa Italiana. Indeed, the group from Padua is the only company in the "alternative energy" sector, of 16 Italian companies involved, which obtained the Elite certification, concrete evidence of its commitment and achievements within the program that offers the selected companies a platform of tools and services that make growth and cultural approach to markets easier.

After the important projects carried out ??in the last three years in Costa Rica, Chile and Colombia for a total investment of more than $ 300 million, with the construction of both large and mini hydroelectric plants, in the last few months, the group from Padua has started a series of important works in Bolivia and other Latin American countries, with a total value of 60 million Euros.

In particular, through its subsidiary S.T.E. Energy, Sorgent.e has entered into a contract with Bolivia’s National Electricity Company (ENDE) for the construction of the Misicuni hydroelectric plant, in the homonymous river, located northwest of the town of Cochabamba. The plant is part of a multiple power plants project which, as a whole, is the largest and the highest hydroelectric project in the South American country.

The plant, which has a net head of more than 1,000 m, will be supplied from the Misicuni dam, currently under construction, and will consist of 3 Pelton turbines with a total power of 120 MW. it is estimated that this plant will be able to produce more than 300 GWh/year of energy.

Sorgent.e’s specialization in mini-hydro, which involves the construction of small plants that can exploit (including very low) heads of water, with lowered environmental impact, in the last few months has earned the group from Padua important international awards as well:

“Borsa Italiana’s Elite certificate that we have obtained these days – said Daniele Boscolo Meneguolo, CEO of Sorgent.e – is a proof of the path we took in 2012 and that has led us to great achievements in the hydroelectric sector both in Italy and abroad, a success strengthened by many awards that we have been awarded in the last few months by the most influential stakeholders in the sector. This is one more reason to continue on the path of internationalization and technological innovation – particularly in mini-hydro, of which we are undisputed leaders in the world – which are the two pillars on which the DNA of our group is based, as confirmed by this important tranche of investments in Bolivia that will lead us to build the largest hydroelectric project in the South American country.”